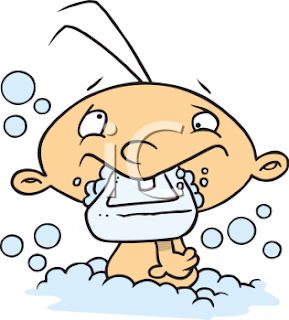 Yesterday morning as I dropped my freshman off to school - she bumped her head and said sh%$... This was the first time I had ever heard her say a real cuss word... My jaw dropped to the floor... Since she was already running late for school - I gave her a stern mom look and left... All day long I kept thinking about my daughter's new potty mouth... Words like that don't fly out without thinking unless they are said often... don't you think???

Last night - I approached her about her new found words.... Her teenage attitude flared its ugly head.. I miss my little girl that never would dream of saying those words... My little girl who saw me as the center of her universe... My little girl who was sweet and cuddly.... Now I have a teenager who rather pull out her fingernails one by one than have a conversation with me about her potty mouth.... As you know - I am constantly "In her Grill" where does that slang come from anyway????

Me: "Not real happy with the S word that I heard this morning- when did you start talking this way?"

Her: "All my friends talk like that. I would be weird if I did not."

Me: " You're weird if you really believe that and if all your friends truly talk like that - then you are hanging out with the wrong kids.."

Me: "You are not allowed to talk like that - it sounds awful, immature, and makes you appear to have a small vocabulary and a smaller mind - You are better than that."

Her: <= (rolling her eyes and the scowl continues) "Mom, I am a teenager and teenagers cuss- it's the mature thing to do..."